A story about boron-substituted aromatics - part one

Another project I have been working on last year was concerned with the quantum-chemical investigation of a bunch of boron-containing aromatics that have been synthesized and studied in the group of Prof. Wagner in Frankfurt. This project is interesting for a number of reasons, the most story-worthy of which is that Prof. Wagners lecture "Allgemeine und Anorganische Chemie" marked the very beginning of my academic career in October 2005. This cooperation was a nice opportunity to "turn the spit" and explain aspects of photochemistry to the Professor who introduced me to chemistry as a scientific discipline some 10 years ago. But also from a scientific point of view this project is exciting. These boron compounds do in general have a number of quite unique photophysical properties (some e.g. exhibit temperature-dependent delayed fluorescence with a curios solvent-dependency), and the project turned out to provide the opportunities to try out a couple of methods I had wanted to try out for a while. The paper itself can be found here. In the following I want to shed some light onto aspects that didn't get too much attention in the brevity of a scientific article.

Two of the four investigated molecules can be derived from anthracene and pentacene by replacing the middle carbons with boron atoms and are named accordingly: Dibora-anthracene (DBA) and dibora-pentacene (DBP). Diborinine (DBI) consists of two antiaromatic biphenylene subunits bridged via the dibora-benzylic motif, while iso-DBP is an asymetric variant of DBP, in which the boron-containing ring is shifted to one side. 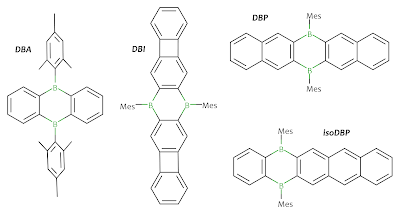 The initial motivation for the project was to find an explanation for the surprisingly different fluorescence quantum yields of these closely related molecules. While isoDBP and DBP exhibit high quantum yields of 90% and 50%, respectively, DBA is hardly fluorescent (2%) and DBI completely dark. But let us postpone this question to one of the upcoming posts about this project and start  off with another question that popped up while I was inspecting the absorption spectra of these compounds in various solvents: DBI and to some extent also DBA exhibit a huge influence of some solvents onto the shape of the absorption spectra. Specifically, the main peaks of the absorption spectrum of DBI in non-polar cyclohexane (CHX) are blue-shifted and almost vanish in acetonitrile (ACN), while this is not the case in other polar solvents. We concluded that there has to exist an specific interaction between the lewis-basic solvent ACN and the lewis-acidic boron-atoms in DBI, or in other words that ACN behaves as a non-innocent solvent.

As a first step to confirm this hypothesis, I computed the structures and electronic energies of one mono- and two di-adducts (cis and trans) with a cheap and fast (exploratory) methodology (B3LYP-D3BJ/SVP, today I would use PBEh-3c). The resulting structures are shown together with the structure of bare DBI in the following picture:

For the energetically feasible adducts of DBI and DBA, I subsequently calculated vibrationally resolved absorption spectra, which can be directly compared to the experimental spectra. For this purpose, I used the same methodology, namely TD-B3LYP with a small SVP basis, since it is fast and due to a surprisingly stable inherent error compensation typically also quite accurate (but also not reliable).

The calculation of vibrationally resolved spectra is one of the things I wanted to try out for a while now and hence, I'll briefly explain the hows and whys in the following. To make this type of calculation possible for such a large molecule, one has to employ a drastic-sounding approximation with a very long name: Independent-mode-shifted-harmonic-oscillator (IMDHO)-approximation. This is necessary to reduce the untraceable problem of knowing the shape of all potential-energy surfaces of all excited-states of interest around the initial (ground-state) geometry to something actually doable. Using IMDHO, the problem at hand is reduced to knowing the vibrational frequencies (normal modes) of the ground-state and the gradients along them in each of the excited states of interest. The assumptions required to get there are:
From these assumptions, it follows that the only difference between the ground- and excited-state PES is the position of the respective minima, which is why its called "shifted"HO. Since we are in the harmonic approximation, all we need to know this shift w.r.t. to ground-state minimum are the gradients along these normal modes in the excited states of interest. Hence, to obtain the vibrationally resolved absorption spectrum within the IMDHO approximation, one first computes the ground state vibrational frequencies (normal-modes), and subsequently the gradient along these normal-modes for each of the excited-states. Having these quantities, we (actually the handy tool ORCA_ASA does that for us) can build the approximate PES and compute the coupling between the electronic and vibrational excitations, yielding the spectra, which are shown together with the absorption spectra recorded in various mixtures of CHX and ACN in the following picture:


Due to the very reasonable agreement between experiment and calculation, in particular for DBI, we can doubtlessly identify the ACN-monoadduct in the spetra recorded in ACN. However, it is difficult to say this with certainty since the trans-diadduct is essentially dark (no absorption) and would not show up in the spectra. Thus, to further investigate the issue I conducted a thorough thermochemical analysis of the formation of the ACN adducts for DBA, DBI and DBP, which I will present and discuss in the upcoming post.