ADC/SS-PCM at glance? - part one

Dear colleagues,
in the framework of a recent project published in this article, I for the first time had the chance to systematically study the performance of ADC/SS-PCM for a group of click-chemistry generated molecules with varying charge-transfer character in their emitting excited state.
The common motif of these molecule is that they consist of an electron-pushing triphenylamin group (right side of the molecule in the figure below) and an electron-pulling group (left side), whose strength can be modulated by oxidizing the contained sulphur atom. In the lowest excited singlet state of all of these systems, an electron is excited from the electron-pushing triphenylamine to the electron pulling part of the molecule. While the excitation-hole turned out to be essentially identical in all of these systems and all solvents, the location and structure of the excited electron differed significantly depending on the molecule and environment.
The figure below shows the structures of the molecules as well as the location of the excited electron computed at the ADC2/SS-PCM/SV level of theory for the non-polar solvent cyclohexane on the left and for the polar solvent acetonitrile in the right.

Since the discussion of the performance of the methodology was (as usual) quite brief in the article, I will share some more methodological insights here and in the following posts.
The central observation, which also made it into the paper, was that the solvent effects are systematically overestimated for this group of molecules, leading to too low emission energies in polar solvents (here acetonitrile, ACN). In the non-polar solvent cyclohexane (CHX) the error seems to cancel out with the systematic overestimation of the emission energies by the quantum-chemical method (ADC2 with a small, non-polarized split-valence basis), leading to a very reasonable agreement.

Something that we only mentioned but did not show in the article was that the spin-opposite scaled variant of ADC(2), SOS-ADC(2) [short: SOS(2)] improves on this systematic error. After the article was published I took a closer look at this and recomputed all of the numbers also with SOS(2). Turns out this method pretty much nails the emission energies in ACN, with those in CHX getting a little worse:
While these trends are most certainly interesting to know for future investigations (use SOS-ADC/SV for polar solvents and ADC/SV for non-polar ones), the question that remains is if this systematic overestimation of the solvent-stabilization is due to A) the quantum-chemical methodology, B) the solvent-model, C) the nature of these molecules or D) a combination of all three.
Speaking for A) is that I have observed before how ADC(2) yields too low energies for charge-transfer states compared to locally excited states. Since in this case the picture was very consistent, including the fact that the problem is corrected by ADC(3), I'm pretty confident that A) contributes at least to some extent. The question that really bothers me, however, is if B) is also the case, because so far, I am pretty sure that the self-consistent treatment of solvent polarization is the one and only physically correct way to do it. You can find my arguments for that in the respective article (same as above).
To further look into the issue, let us eliminate the inherent error of the quantum-chemical methodology as far as possible by looking at the CHX to ACN shifts in the emission energy. Let us furthermore include the emission energies from the first solvent-field iteration in the comparison, i.e. the ones calculated with the solvent field obtained for the excited-state computed in the relaxed ground-state solvent field (ptSS-calculation). 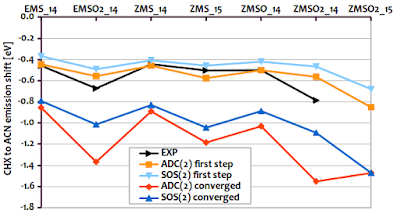 Seeing this plot for the first time literally shocked me. The agreement of the one-shot approach with the experimental data is so apparent and convincing that I immediately starting looking for the fundamental flaw in the self-consistent approach. The latter apparently overestimated the shifts by about a factor of two. Did I say about? For ADC(2), its pretty much exactly a factor of two: 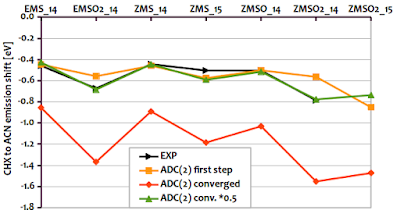 Can this be a coincidence? Exactly a factor of two? The lines are pretty much on top of each other. Yet, I'm pretty sure (as sure as it gets for a scientist) that this is indeed a coincidence, for a number of convincing reasons, which I will elaborate in the next post. And the best thing will be, that we can still learn from this coincidence!